Adjacent cells within and epithelial sheet are joined by the apical junctional complex. This structure, which includes the tight junction (zonula occludens), adherens junction (zonula adherens), and desmosome. The tight junction, which provides the seal that limits flux across the paracellular space between cells has been shown to contain over 30 unique proteins. Remarkably, many of these contain domains specialized for interaction with one another. This has led to the acceptance of a model in which tight junction proteins are crosslinked to one another and the overall structure is static at steady state.

In 2008 we reported that the static model of steady-state tight junction structure was incorrect (Shen et al. 2008. J Cell Biol). Using a variety of techniques including fluorescence recovery after photobleaching (FRAP), found that distinct protein components of the tight junction actively bind to and release from one another, i.e. the molecular structure of the tight junction is continuously remodeled, even at steady state. We took advantage of mathematical modeling tools to define distinct pools of each tight junction protein as well as rate constants that define exchange between these pools and/or diffusion within the plasma membrane. We also found that tight junction pools of some proteins, e.g. the peripheral membrane protein zonula occcludens-1 (ZO-1), exchanged with a large, soluble, cytoplasmic pool by an energy-dependent mechanism that depends on function of the perijunctional actomyosin ring. In contrast, other proteins, e.g. the transmembrane protein occludin, diffused within the tight junction and lateral membranes by processes that could be impacted by altering membrane fluidity but were energy-independent.

The discoveries above led to the hypothesis that modification of pool size or kinetics of exchange between pools could be a mechanism of tight junction regulation. We first explored this idea in the context of physiological tight junction barrier regulation (Yu et al. 2010. PNAS), as we had previously discovered that this form of regulation required myosin light chain kinase activation (Turner et al. 1997. Am J Physiol – Cell Physiol). Inhibition of myosin light chain kinase prevented increases in paracellular permeability and selectively stabilized ZO-1 at the tight junction, both in vitro and in vivo. Kinetic analysis showed that ZO-1 recovery could be dissected into two processes; a slow process that is dependent on myosin light chain kinase activity and a more rapid process that depends on filamentous actin.

We have gone on to characterize other protein-protein interactions that are critical to tight junction structure and function using a combination of in vivo and in vitro approaches. Several of these studies have focused on occludin, and we have identified both physiological and pathophysiological modifications of occludin-mediated interactions. In ongoing work, we are defining the structural events that regulate tight junction protein interactions and, in turn, barrier function. 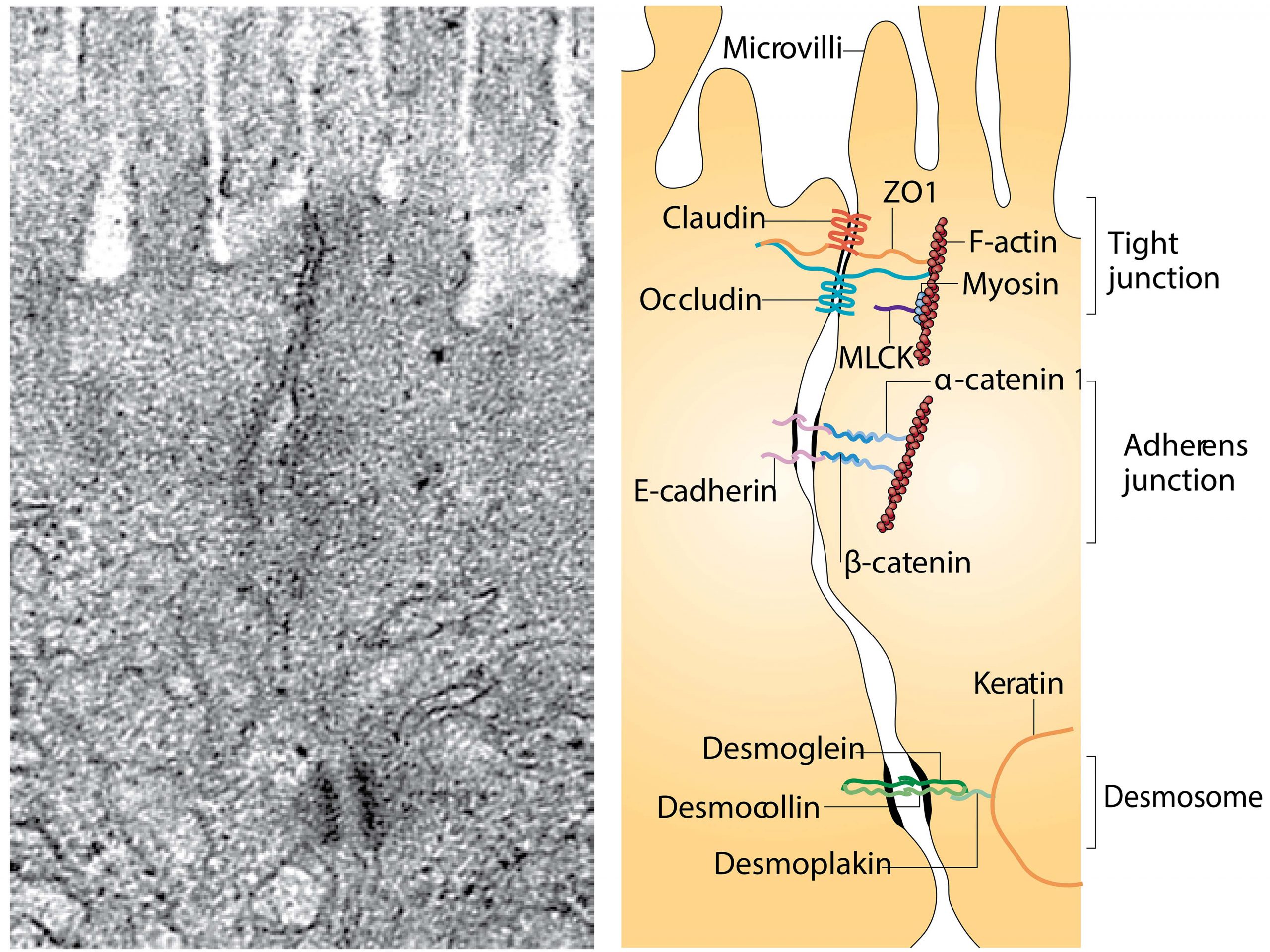 An electron micrograph and corresponding line drawing of the junctional complex of an intestinal epithelial cell. Just below the base of the microvilli, the plasma membranes of adjacent cells seem to fuse at the tight junction, where claudins, zonula occludens 1 (ZO1), occludin and F‑actin interact. E‑cadherin, α‑catenin 1, β‑catenin, catenin δ1 (also known as p120 catenin; not shown) and F‑actin interact to form the adherens junction. Myosin light chain kinase (MLCK) is associated with the perijunctional actomyosin ring. Desmosomes, which are located beneath the apical junctional complex, are formed by interactions between desmoglein, desmocollin, desmoplakin and keratin filaments. From Turner. 2009. Nature Rev Immunol.